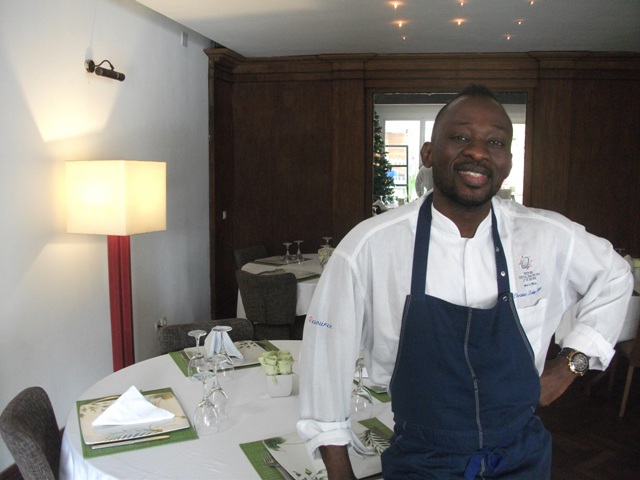 At the age of 18, this gifted gastronomy chef found passion in cooking while he was still a working student at the university of Brussels. “The kitchen came to me,it was my destiny” He recounts.The young chef of 38 years  sharpened  this natural culinary talents in the best culinary schools ,while working for the best gastronomy institutions.He is the first black to be integrated into the Ritz-Escoffier,an institution situated in Paris.He has worked with top Belgian chef Yves Mattangne,and ”Debailleul” one of the best Bakeries in France.”Grilles du vieux Boitsfort” ”Grilles aux herbs” are some of the Belgian bakeries that have benefited from his services.

Christian Youmbi opened his first artistic Restaurant in Belgium “Re-Source” meaning ”Back to Origin” A t rejuvenating bath for taste buds ,which attracted many guests,and it’s worth to be added to the Michelin guide ”The holly Grail for Restorers”

He was also the first black to be elected best young chef in Brussels by Gault Millau.He had to work so hard to become successful for the honor of his family.Returning to his homeland,reunited him with his wife and to kids. he got his ever first job in a mining company in Lubumbashi as operations manager,he had the duty of feeding 500 personnel per day,this was a great challenge because, it was at the expense of his family.The star chef decided to concentrate on personal projects.

Between Tradition and Modernity.

After 3 years in Kinshasa, he opened his Restaurant, ”Re-Source” situated in the posh neighborhood of Gombe.He offered a fusion of traditional and modern dishes to his guests.He also created “Le Retour de peche” a dish that presents the different ways of cooking fish.He opened a culinary school in Lubumbashi,and took upon the responsibility to train youths,just like what he was doing in Brussels. He just created a center for interns, in a populated community in Kinshasa.His objective is to aid student who do not always have the admittance to do internships,to apply what they learned in school.The “Star Chef” winner thinks it’s important to valorize the works of African Restorers,thus telling youths it’s possible to learn and live by this business.

Images of my cooking